by Mark Longstaff-Tyrrell · in Uncategorized 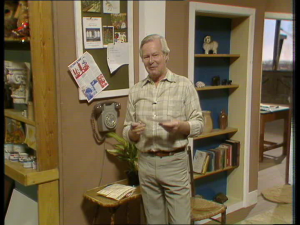 In the late 70s and early 80s Tony Hart presented a children’s art and design programme on BBC1. The studio set was a sprawling warehouse loft with huge skylights and windows overlooking the city. His enthusiasm and imagination had us all enthralled and ensured that he and the programme achieved cult status. Watching some episodes recently I noticed he also had a kicking soundtrack. Apart from the well documented use of ‘Left Bank Two’ and ‘Cavatina’, such avant garde tracks as ‘Network 23’ by Tangerine Dream and Brian Bennett’s ‘Alto Glide’ also make an appearance. But there are others that even Shazam cannot recognise. They’re probably library tracks but nonetheless are very well curated, ranging from rock, funk, reggae and ambient electronica. Here’s a selection, along with the sounds of art being made in the background. They make for an extremely chilled afternoon’s listening. Definitely worth a 30 year anniversary issue on BBC Records and Tapes. 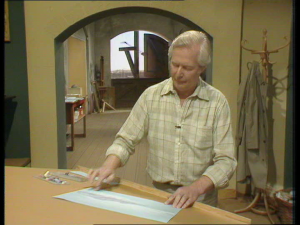 Can you identify them? Here are the others ID’d so far: